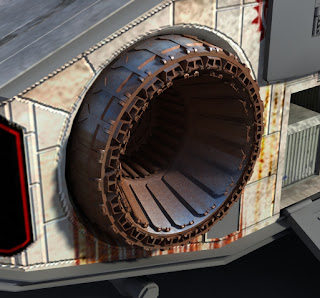 Something else I need to do is establish a texture scale. This is something I learned whilst working on Puss in Boots. It gives the textures on each surface a consistency and also gives you a fairly good uniform idea as to how close you can get to any given part of the model before it get's all soupy. The scale we used on Puss in Boots was, if I remember correctly, 512 pixels = 2 metres. Giving a pixel density of about 2.5 pixels per centimetre. That's pretty darn good but if the textures aren't tiled I'm going to end up with a load of VERY big textures which could get quite gruelling for the memory and the render times :/ I'll have to wing it, and I may well reduce the scale as I don't really ever intend rendering the ship up quite that close.
Posted by Scarecrow at 13:45